"French All Around Us" — Meet the Authors 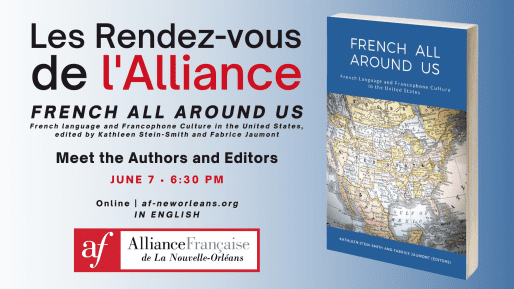 The next Rendez-vous de l'Alliance will be online and we're excited to host the Louisiana-based contributors to the new book "French All Around Us: French language and Francophone Culture in the United States"
along with editors Kathleen Stein-Smith and Fabrice Jaumont.

This event will be online and in English and is free to the public!

Meet the presenters below.

David Cheramie grew up in the Cajun village of Golden Meadow on the Bayou Lafourche. He has published four collections of poetry. He was Executive Director of the Council for the Development of French in Louisiana (CODOFIL) from 1998 to 2011. He is a Knight in the French Order of Arts and Letters and a member of the Quebec Order of Francophones in the Americas. He has a doctorate in Francophone studies from the University of Louisiana at Lafayette. He has been writing" En français, s’il vous plaît" in Acadiana Profile magazine for the past eleven years. His writing can be found on his blog, Un bougre du bayou, at davidcheramie.blogspot.com.

Joseph Dunn’s understanding of Louisiana’s distinct cultures, languages, and heritage has led him to work at the highest levels of the state’s tourism and cultural industries, including positions at CODOFIL and the Consulate General of France in New Orleans.
Currently, his primary role is to oversee the public relations and marketing efforts at Laura: Louisiana's Creole Heritage Site. Joseph is an outspoken advocate for the development of social, professional, and economic opportunities for Louisiana’s franco-créolophone heritage language communities and is particularly interested in the concepts of minority language rights and identity.
Joseph Dunn was named a Chevalier dans l’ordre national du Mérite in 2021.


Fabrice Jaumont is a scholar-practitioner, award-winning author, and education advisor based in New York. He currently serves as Education Attaché for the Embassy of France to the United States, a Research Fellow at Fondation Maison des Sciences de l’Homme in Paris, and an adjunct professor at City University New York. He has published seven books on bilingualism, education, and philanthropy, including The Bilingual Revolution: The Future of Education is in Two Languages, and Conversations on Bilingualism. Jaumont holds a Ph.D. in Comparative and International Education from New York University.

Marguerite Justuce was born in Lafayette, where she currently lives and works on community-based projects for CODOFIL (Council for the Development of French in Louisiana).  She took an interest in the language of her maternal grandparents at a young age, and went on to complete a PhD in French Studies at LSU with a specialization in Linguistics.

Kathleen Stein-Smith a dedicated foreign language educator and advocate. She serves as Chair of the AATF (American Association of Teachers of French) Commission on Advocacy, an America's Languages Fellow, and as a member of the ATA Education and Pedagogy Committee and the MLA Delegate Assembly. She is also active in foreign language education associations, including the NECTFL Advisory Council, CSCTFL Advisory Council, and as a SCOLT sponsor. She has presented at numerous professional conferences at the state, regional, and national level, is the author of eight books and numerous articles about the foreign language deficit and the importance of multilingualism, has given a TEDx talk on the U.S. foreign language deficit, has been interviewed by press and radio, and maintains a blog, "Language Matters." She earned a Baccalauréat spécialisé and Maîtrise  in Québec, where her master’s thesis on the comparative stylistics of French and English was written under the direction of Jean-Louis Darbelnet.


Scott Tilton is the cofounder and director of the Nous Foundation. Born in New Orleans,  Scott lived in Paris for 6 years before returning to Louisiana. He worked as a consultant at EY France on projects for the European Union, the UN, and the French government. He also had the opportunity to launch and spearhead the initiative that saw Louisiana join the International Organization of the Francophonie in 2018. A graduate of the University of Virginia, Scott holds a master’s degree in International Relations from Sciences Po Paris.


The next Rendez-vous de l'Alliance will be online and we're excited to host the Louisiana-based contributors to the new book "French All Around Us: French language and Francophone Culture in the United States"
along with editors Kathleen Stein-Smith and Fabrice Jaumont.

This event will be online and in English and is free to the public!
Stay tuned to learn more about each presenter.