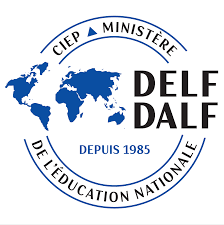 The Alliance Française offers two types of exams and diplomas: The DELF/DALF exams and the TEF exams which can be taken for a variety of academic, proffessional, and personal reasons.

• The DELF (Diplôme d’Etudes en Langue Française) and the DALF (Diplôme Approfondi en Langue Française) are official diplomas awarded by the French Ministry of Education to certify foreign candidates’ proficiency in French. The exams are useful for school records and college and job applications in French-speaking countries.
The Exams are given 3 times per year, in March, June, and December. See 2022 dates for adults and for DELF Junior (Middle and High School age) below.
- Learn more about the DELF exams on the official French governmental page.
• The Test d’Évaluation de Français  (TEF ) is a test of general French which assesses the level of proficiency in French of francophones and non-francophones alike.Created in 1998 by the Paris Ile-de-France Chamber of Commerce and Industrie,  TEF is an international benchmark test that measures your level of knowledge and skills in French. It is recognised as official proof of language proficiency by Citizenship and Immigration Canada (CIC) as well as by the Ministère de l’Immigration et des Communautés Culturelles du Québec (MICC) for permanent residency applications, Certificat de Sélection du Québec applications and Canadian citizenship applications.
- Learn more about the TEF  on the official Français des Affaires page. 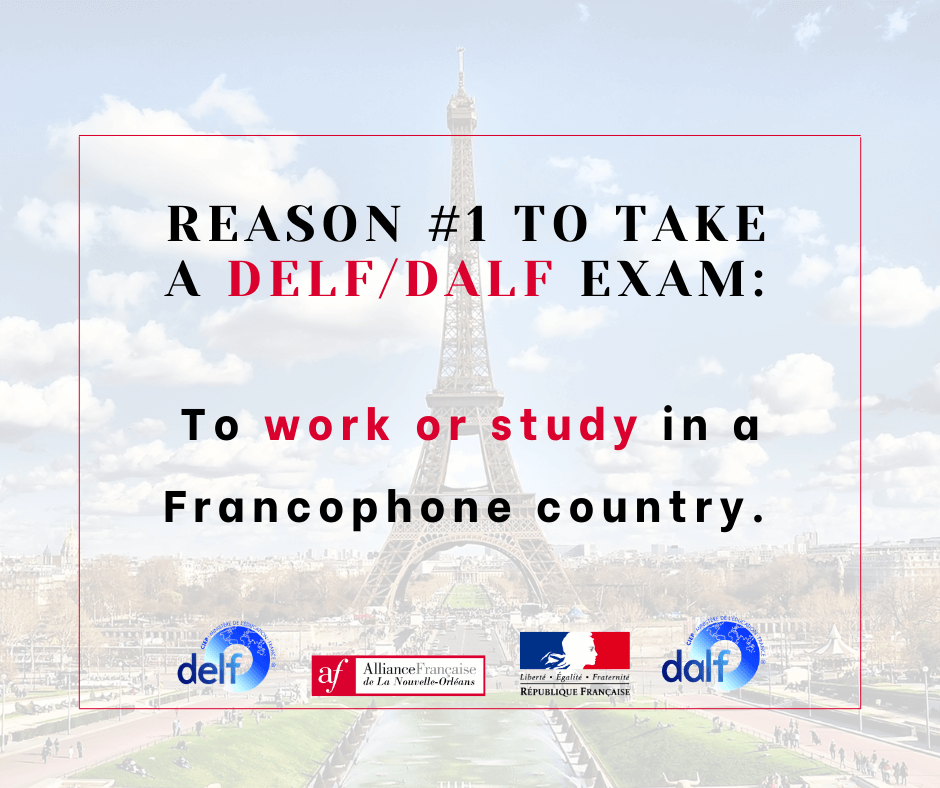 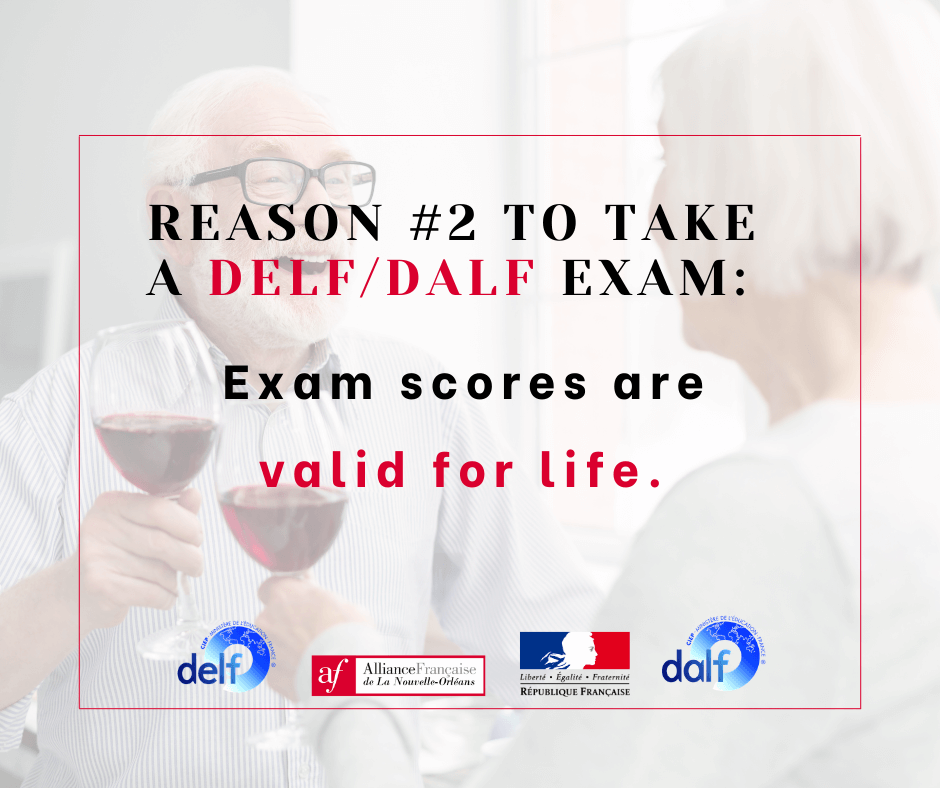 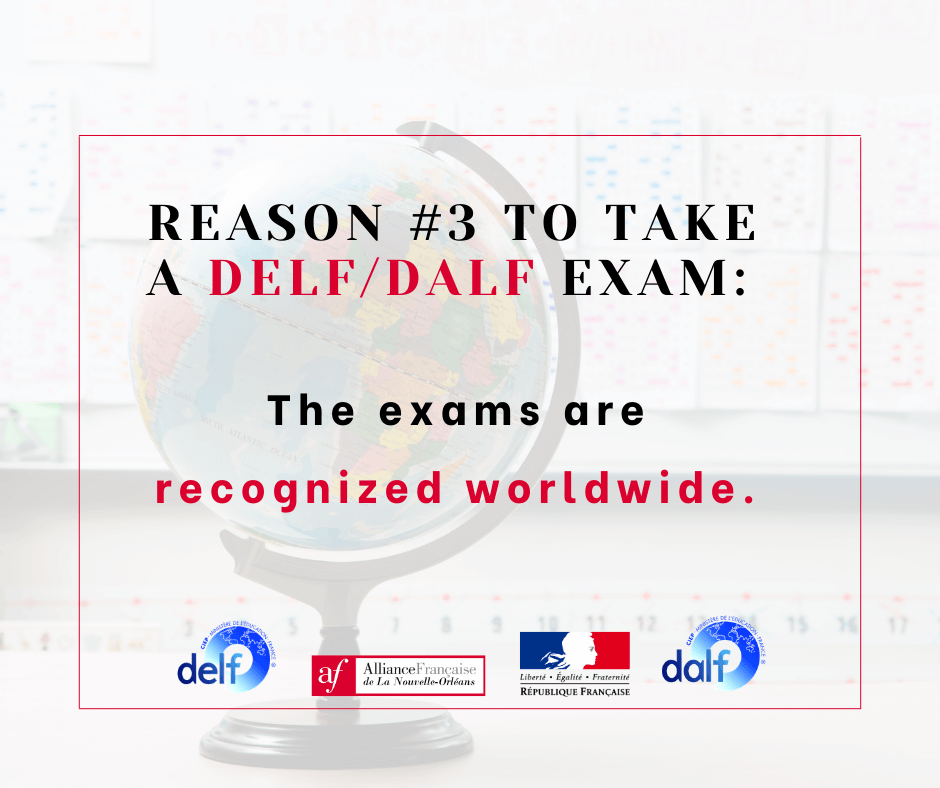 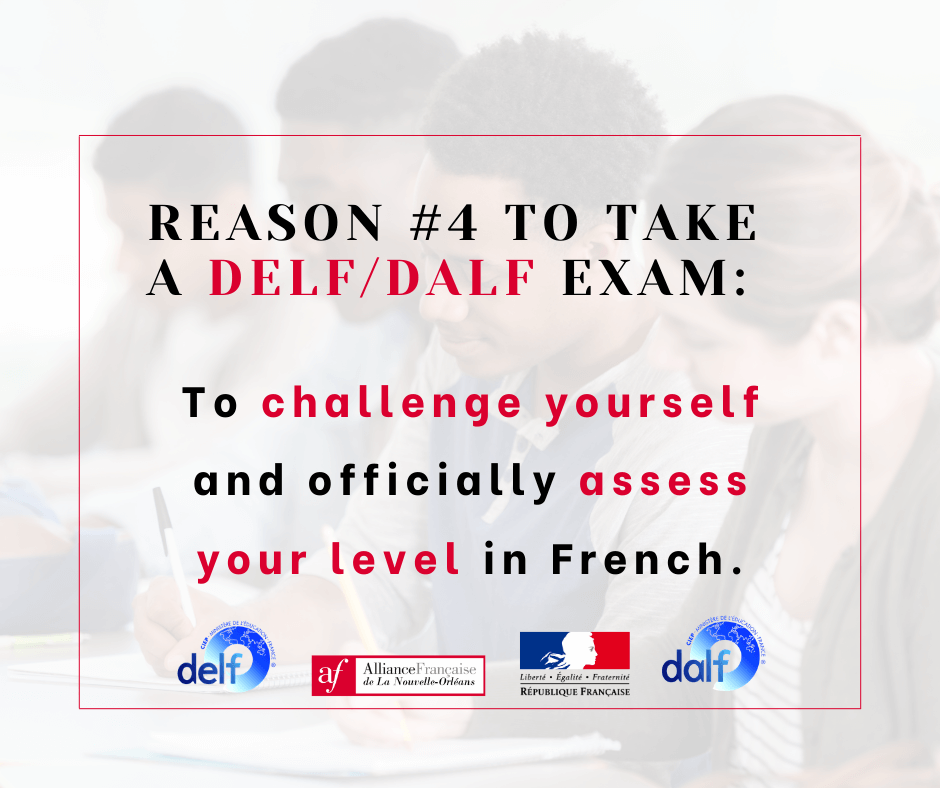 Why are people taking the DELF at the Alliance Française?

"I chose to take the DALF for my personal and professional enhancement. I appreciate my education here in the U.S. but it was also very important to me to have a diploma from the French government that certifies my level of the language within the CEFR, something that is recognized worldwidee according to the common framework. I feel that the C2 diploma was a helpful element to add to my application to Tulane's doctoral program, and that it will help me in my career choices going forward - especially since I would like to live in France or a Francophone country."
Christine E. DALF C2 certified, 2019
"J'ai choisi de passer le DELF A2 parce que je voulais vraiment savoir si j'en étais capable, et continuer de progresser dans les classes. C'était gratifiant de savoir que j'ai réussi et que j'ai obtenu une accréditation dans une norme mondiale."
"I chose to take the DELF A2 because I wanted to know if I could really pass it, and to continue to progress in my classes. It was gratifying to know that I had passed and that I had obtained an accreditation by a global standard."
Shawn J DELF A2 certified, 2019