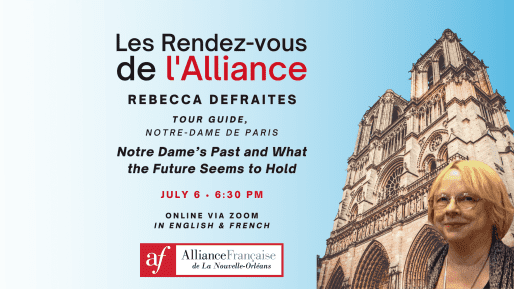 The next Rendez-vous de l'Alliance will be online with Rebecca DeFraites, English tour guide at Notre-Dame de Paris.

DeFraites will present "Notre-Dame's Past and What the Future Seems to Hold."

Rebecca has lived in Paris since 2004.  She and her late husband, Gerry DeFraites sold their house in the French Quarter, sold their business, retired and moved to Paris.  Over the previous ten years or so, they had exchanged their home in New Orleans more than forty times.  They went to many places in many countries, but they kept returning to France.  Believing the move was inevitable, Rebecca studied French in earnest at the Alliance Française in NOLA and received her DALF (Diplôme Approfondi de Lange Française) a few months before their déménagement.

The apartment in Paris is in the fifth arrondissement, a stone’s throw from Notre Dame and her bells were a daily companion.   Through a little luck and a lot of persistence, Rebecca became a member of  CASA (Communautés d’Accueil dans les Site Artistiques), a group of volunteer guides associated with the Cathedral of Paris who gave free tours in nine languages.  One of a handful of native speakers of English on the équipe, she began leading regular tours in 2007.  By her count, she has given over 400 tours of the church. Not surprisingly, she was giving a tour of the church on the afternoon of Monday, April 15, 2019.  It was the last volunteer tour in English.

Rebecca will talk about Notre Dame’s past and what the future seems to hold.  She’s passionate about Paris and her quartier in particular and will happily answer any questions about what it’s really like to live in Paris.