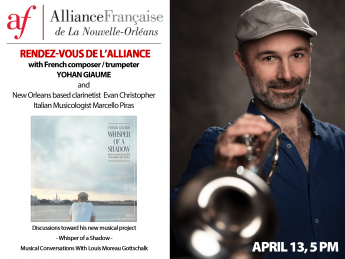 During this "Rendez-vous de l'Alliance", Yohan Giaume will present his musical project called "Whisper of a Shadow" that he recorded in New Orleans with renowned musicians from both sides of the Atlantic with an emphasis on New Orleans based artists.  On this occasion, Yohan Giaume will be joined by two other guests to discuss New Orleans musical history and its foreign influences: Evan Christopher, New Orleans based clarinettist who also features on "Whisper of a Shadow", and Marcello Piras, an Italian musicologist.

For the last 15 years, French composer, trumpeter and ethnomusicologist Yohan Giaume has immersed himself into different foreign cultures and musical traditions mainly guided by his love for the music of the African diaspora. He has lived in Cuba, Argentina, Uruguay, Peru, Morocco, Europe and also different places throughout the United States. Giaume began in Cuba and South America, but it was New Orleans that left him rapt.

He has been exploring the vernacular musical traditions of New Orleans since 2009. During his journeys to the Crescent City, he also made an unexpected discovery: Louis Moreau Gottschalk, the Louisiana romantic Creole composer and pianist, had taken almost the same route in his travels as Giaume did two centuries apart.